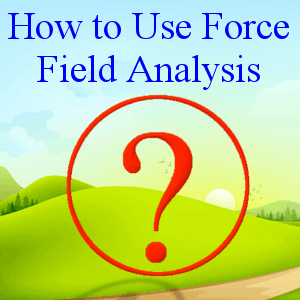 Force Field Analysis is a useful decision-making technique. It helps make a decision by analyzing the forces for and against a change, and it helps communicate the reasoning behind the decision.

It can be used:

Specify the issue. Write your plan or proposal for change in a box in the middle of your paper.

Then score each factor based on its influence, say, 1 (weak) to 10 (strong) and add up the scores for and against change to find out which of these wins.

Identify as many of the factors that will influence the change as you can. Where appropriate, involve other people, such as team members or experts in your organization

Identify the forces which are easiest to shift, and the action required.

Determine how to strengthen the positive forces.

Eliminate or reduce the effect of negative forces.