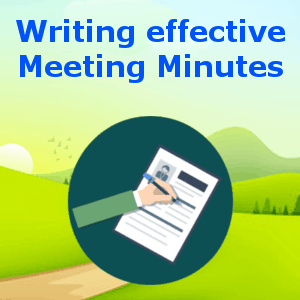 The style format and content that you use to record the Minutes of Meetings depends on the organisation, its level of formality, its size and culture.

I am offering an informal guide, for less formal meetings and organisations .Please note that it does not cover the fulfilment of any statutory requirements, such as those that cover requirements for the Minutes for a Public Company, for meetings such as the Annual General Meeting, which have to conform to certain regulations.


If you are nominated to take the Minutes at a less formal meeting, you are acting on behalf of the Meeting Chair, and effectively making a record for them, so discuss with them what they expect you to record. They probably have a standard format, or even a form you can use. Make sure you have a copy of the Meeting Agenda, and use it to match in the Minutes the topic titles and numbering used in the agenda.

Why do you need to take Minutes.

There are quite a few reasons you would do this; – .

What should the minutes record?